There are mainly two types of ACB are available.

This was working principle of air circuit breaker now we will discuss in details the operation of ACB in practice.


The air circuit breaker, operated within the voltage level 1 KV, does not require any arc control device. Mainly for heavy fault current on low voltages (low voltage level above 1 KV) ABCs with appropriate arc control device, are good choice. These breakers normally have two pairs of contacts. The main pair of contacts carries the current at normal load and these contacts are made of copper. The additional pair is the arcing contact and is made of carbon. When circuit breaker is being opened, the main contacts open first and during opening of main contacts the arcing contacts are still in touch with each other. As the current gets, a parallel low resistive path through the arcing contact during opening of main contacts, there will not be any arcing in the main contact. The arcing is only initiated when finally the arcing contacts are separated. The each of the arc contacts is fitted with an arc runner which helps, the arc discharge to move upward due to both thermal and electromagnetic effects as shown in the figure. As the arc is driven upward it enters in the arc chute, consisting of splitters. The arc in chute will become colder, lengthen and split hence arc voltage becomes much larger than system voltage at the time of operation of air circuit breaker, and therefore the arc is quenched finally during the current zero.

There are also some disadvantages of air blast circuit breakers-

As we said earlier that there are mainly two types of ACB, plain air circuit breaker and air blast circuit breaker. But the later can be sub divided further into three different categories.

The working principle of cross blast air circuit breaker is quite simple. In this system of air blast circuit breaker the blast pipe is fixed in perpendicular to the movement of moving contact in the arcing chamber and on the opposite side of the arcing chamber one exhaust chamber is also fitted at the same alignment of blast pipe, so that the air comes from blast pipe can straightly enter into exhaust chamber through the contact gap of the breaker. The exhaust chamber is spit with arc splitters. When moving contact is withdrawn from fixed contact, an arc is established in between the contact, and at the same time high pressure air coming from blast pipe will pass through the contact gap and will forcefully take the arc into exhaust chamber where the arc is split with the help of arc splitters and ultimately arc is quenched 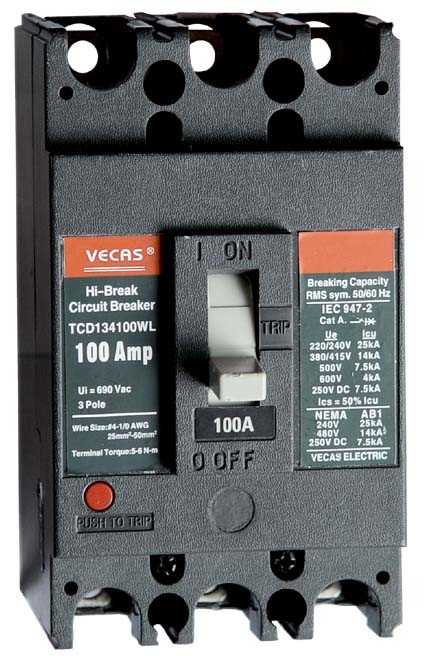